Gender equality may be a core value for the EU, but European women still have unequal access to power, prosperity and safety. A structural system of male dominance, patriarchal traditions and heteronor-mativity has facilitated the systematic oppression of women and LGBTQI+ (Lesbian, Gay, Bisexual, Trans, Queer and Intersex) individuals in both private and public spheres.

The EFA’s core mission and work is grounded in the understanding that women have diverse needs and identities. This is particularly true for women in minority, stateless, migrant, disabled and LGBT+ groups, as well as those who are young and elderly, rural and poor. They face greater levels of exploitation, discrimination and violence, and are marginalised from the political arena.

Women are still underrepresented in positions of power and decision-making throughout Europe. The EFA believes that the participation of women in public and political life guarantees fairer, more democratic and more diverse societies. We therefore fully support gender parity and recognise that Europe needs more feminist leadership — leadership that values diversity and makes space for women, particularly from minorities and other vulnerable groups.

Women, children and the elderly are most heavily affected by economic crises, and financial instability and cuts in public spending have exacerbated poverty among women in recent years.

The EFA promotes economic independence for women by strengthening EU equality legislation, guaranteeing individual rights to social protection and taxation, ending gender pay and pension gaps and providing social care, parental leave and child-care. Not only should women and men be equal carers of children, the elderly and people with disabilities — we also support the creation of decent work for women, in particular with new employment opportunities in social entrepreneurship, the digital economy and other innovative fields.

Moreover, violence against women still constitutes the most widespread violation of women’s human rights in Europe. Addressing old and new forms of violence is a priority for the EFA. We call for gender-sensitive, evidence-based and comprehensive public policies to stop violence against women — ranging from legally-binding instruments to awareness-raising activities — with sufficient human and financial resources. We call for more services that protect, assist and inform women when they seek help; improved access to and safety in police, judiciary and healthcare systems; wide-spread sexual and reproductive health and education; better support for women’s organisations and NGOs; and campaigns that deconstruct myths about gender violence.

We believe that LGBTQI+ voices and experiences need to be heard and affirmed. LGBTQI+ people are vulnerable and have historically experienced hostility and violence. Laws against hate crime and hate speech need to be consistent and cover homo-phobia and transphobia in all EU member states. The EFA campaigns for rights and equality by calling for safe and inclusive education, supporting an inclusive understanding of family, building cross-cultural solidarity and including youth perspectives. Currently in the EU, discrimination on the grounds of sexual orientation is only prohibited in the field of employment. We want to see this expanded to other areas like healthcare, education, social protection and access to goods and services.

The EFA demands that the European Union improve its antidiscrimination laws by mainstreaming gender into all fields under its competence. The EU must consider women’s diversity and adopt appropriate measures to combat different forms of discrimination. We call on the EU to measure equality and the impact of new and existing policies and legislation, and to prioritize gender sensitive and inclusive EU budgeting. 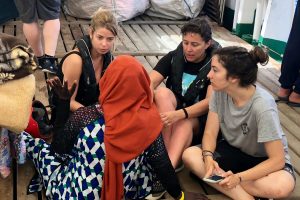